Customer must provide the site and secret keys prior to install or the form will not function. Instructions for setup can be found here:

Anti-Spam Protection
Spam can be a challenge for any form. Now with the Gravity Forms reCAPTCHA Add-On, we have added Google reCAPTCHA v3 to the toolbox of anti-spam methods that you can use to protect your forms, helping to reduce the amount of spam form entries you receive.

Google reCAPTCHA v3
Google reCAPTCHA is a free security service that protects your website from fraud and abuse. Google reCAPTCHA v3 not only helps identify spam entries, it also ensures that your users aren’t interrupted during a form submission, providing a smoother user-experience and boosting form conversion rates.

When a form entry is submitted, the Google reCAPTCHA score that is generated by the interaction is stored with the form entry. Gravity Forms will compare the score to the threshold established in your settings, and if the entry is less than or equal to that threshold, the entry will be sent to spam.

(Gravity Forms 2.5 (or higher) is a requirement to enable the reCAPTCHA Add-On).

(You do not need the Gravity Forms reCAPTCHA Add-On to use Google reCAPTCHA v2 with your forms).

When to Use Gravity Forms reCAPTCHA Add-On

Use this add on if you need an extra layer of security on your Gravity forms. If you are looking for a WooCommerce based reCAPTCHA please use the reCAPTCHA for WooCommerce plugin instead.

We will install, activate, and enter the provided site/secret keys.


Customer must provide the site and secret keys prior to install or the form will not function. Instructions for setup can be found here:

In the WordPress dashboard go to > Forms > Settings > reCAPTCHA

Enter the customer provided site and secret keys under the reCAPTCHA v3 section. 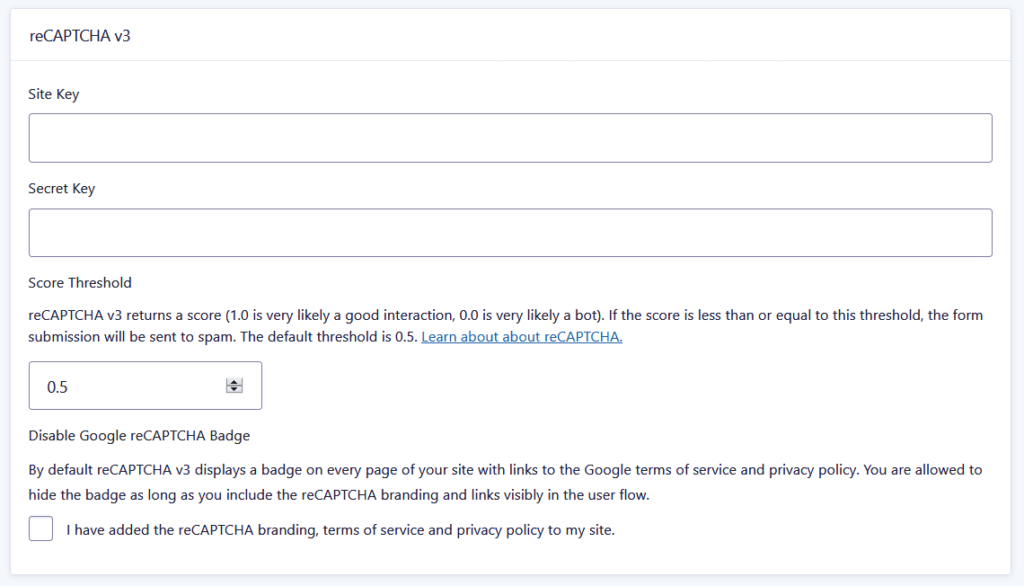 There is no need to add a form field for the v3 CAPTCHA as it adds the script sitewide. The following screenshots show what the reCAPTCHA badge looks like on a site:

This plugin was tested with the following versions of these base plugins.

Supported Feature requests require a PDF Worksheet be generated using the Functionality Form, and the PDF Worksheet must be added to the project.